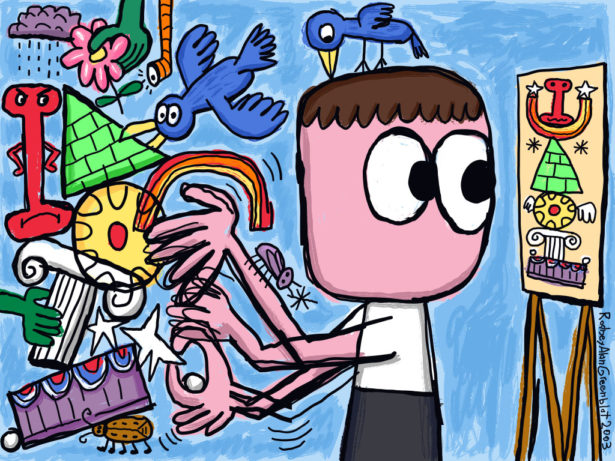 One trap that I think many artists (including me) fall into is that we think we know what we are doing. It’s as if there is some agreed upon standard of what an artist is and/or does. As if art were something defined in history, or something with some collection of conditions that had to be met in order to be called art. If you go the the Metropolitan Museum of Art often like I do, you might become convinced that there were standards to be met in order to make something respectable. Like me, you might start thinking you were like those artists of antiquity, building your craft and working towards a masterpiece. You might even see your own work as an example of a style, or fitting into a category, the way all the works in the Met fit into different galleries defined by theme, era, geography, style or materials. You might think of yourself as a “painter” or a “sculptor” or something like that. That’s a trap.

The Whitney Biennial makes it very clear that anything you think art should be is wrong, and has been deconstructed by some artist somewhere. If you even have a notion of what an artist does in order to be an artist, that will be contradicted by someone who’s work is in the Biennial. For example:

Joseph Grigly’s work consists of several table shaped display cases that contain papers, books and photographs of a lost archive of deceased art critic and editor Gregory Battock who studied minimalism and conceptual art in the 1960’s and 70’s.

Philip Vandenhyer has remade a 1988 wall piece by artist Gretchen Bender who died in 2004. The piece is what looks like a large crumpled sheet of black vinyl or plastic with cutout light up text of the names of popular movies glowing through it.

Even when the format is familiar, let’s say a rectangular painting hanging on the wall, there are challenges. In Rebecca Morris’s large canvases, the paint is loosely applied like watercolor, forming geometric linear shapes and scattered blotches. The forms reminded me of 1980’s graphic design.  The paintings seem to be saying something funny about abstraction but I’m note sure what. They are amazing paintings.

There are so many works worth mentioning, but I guess I should point out two of my favorites: Amy Sillman’s softly painted abstract canvas called “Mother” is a gem. The forms are playful and the colors lightly appiled. The composition is off balance and solid at the same time. It’s tough to make a fresh take on abstraction (I’ve tried) and I think Amy Sillman has done it wonderfully.

On the other end of the spectrum I loved Jacolby Satterwhite’s mesmerizing computer graphic and live action animation “Rectifying Desire.” It is a stream-of-consciousness psychedelic chaos of folding and unfolding architectures, ritualistic sexual scenes, strange dances all occurring in outer space. It was difficult for me to stop watching it. This artist is twisting and re-figuring in a personal language all the regular manners of digital video and 3d animation that we are used to seeing in movies and TV commercials.

My own work was featured in the 1985 Whitney Biennial, and looking back I can see why I was included. My work challenged the assumptions at the time, and was also part of a movement, or maybe a backlash against minimalism and conceptual art. Of course I didn’t see it that way, I was just doing what came naturally to me. I was 25 years old at the time, and although I was ambitious, I don’t remember thinking about being in museum shows, or making any particular statement. I remember feeling empty headed compared to the curators and even other artists I was meeting at the time. Maybe that’s where my success was generated, an open minded full-on approach to whatever, without expectations. So I was chosen to be in the Whitney Biennial.

If you are an artist and happen to be reading this, you may wonder if your own work might end up in the Whitney Biennial. I have thought about this, and wondered if my work might return to the show. After years of considering the possibility I’ve decided to give up trying. It sounds negative, but actually giving up sometimes opens another doorway. Where I was 29 years ago is very different from where I am now. Now I’m free to work towards the distant wide open unknown. Just working steadily on a beautiful dysfunctional off-balance vision of the world is all I can really do. When I stopped aspiring to the Whitney Biennial I started being inspired by it. Enjoy the show!