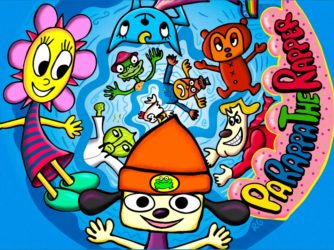 The legacy of the great PARAPPA THE RAPPER Playstation video game lives on.

1.“When will the next Parappa Game come out?”

I don’t know. As of this writing (updated January 2022) there is no plan for another Parappa game. Why? I’ve thought long and deeply about this question! There are many possible answers, theories, complicated circumstances and even a few facts that may account for Parappa’s disappearance from the game world.  My dream was that Parappa would have been Sony’s ultimate mascot, as Super Mario is to Nintendo, so Parappa should have been to Sony. If only! Ah but that’s all in the distant past. The good thing about “I don’t know” is that it means the future is open. There are many possibilities. All people can still enjoy the old Parappa games and characters. If we keep talking and blogging about how great Parappa IS, then the possibilities are all there. As Parappa says, “You Gotta Believe!”

2. “How did you originally get involved with the Parappa project?”

In 1994 I was hired by Sony Creative Products, a licensing company inside Sony Music Japan. I was hired to design cute characters for printed products, clothing and toys. I designed a bored brown bear named PJ Berri, a cute precocious girl named Pony Pony, a blue fashionable cat named Katy Kat, and a super happy flower girl named Sunny Funny. Sony Creative was designing products with these fun characters.Little did I know in another Sony office, Matsaya Matsuura, a well know pop musician was developing a game for a brand new game platform called Playstation. His game was an interesting “simon says” that used rap beats. He was already a fan of my artwork, and when he found out I was already working for Sony, he asked the people at Sony Creative Products if I would design the characters and world for his game. Of course I said yes.

When I went to meet Matsuura’s team, they had already made a crude animation demo of the rap-music-simon-says-game using my characters from my 1993 CD-ROM Dazzeloids. Matsuura’s animation people loved the flatness of my work, and thought of creating flat characters who move around in a 3D world. Playstation was a first generation a 3d platform, a real technical feat at the time.I returned to New York and set about making sketches for the characters and world. I got word from Sony Creative that they wanted to put my colorful funky PJ, Katy, and Sunny characters in the game. For some reason Pony Pony did not make the cut. I started drawing a wacky funny cute American suburban land where my characters could live and play. The Japan team loved it.

Matsuura wanted the main character to be an upbeat, lovable slightly naive dog. I made several sketches and Sony Creative chose a dog with a pointed cap. Matsuura liked it too, and he had come up with a name for the game: Parappa The Rapper. “Parappa” is some kind of play on Japanese words that means “paper thin”. So Parappa was born.

3. “Did you create all the characters?”

I drew and named all of those characters, as well as the world that they inhabit. The crazy great story was written by Gabin Ito and he asked for several “teacher” characters who would challenge Parappa to rapping contests. They needed a Karate/Kung Fu master, a driving instructor, an owner of a flea market, a cooking show host, and also a “bad guy” rival for Parappa.

4. “Who wrote the music for the Parappa Games?”

The music was written by Matsaya Matsuura with lyrics by Ryu Watabe. When I met Ryu Watabe and heard the lyrics he was writing and heard him singing in the voice of Chop Chop Master Onion, I realized we were making something great. Matsuura-san is a multi talented pop star who composes, performs and produces his own music with some of the most talented musicians in Japan.

5. “When was the Parappa the Rapper first Playstation game released?”

The game was released in Japan on December 6th 1996. It started selling well right away and by the spring of 1997 it was a huge hit in Japan. It was released in the US and UK in November 1997. By the end of 1997 Parappa the Rapper had sold nearly one million copies, and went on to sell three million copies world wide.

I have two answers to that question. 1. Parappa’s age in the Playstation games is probably 18 and he never gets any older. In the Parappa Anime he is much younger as he is attending public school. 2. Characters in stories, animations and games don’t need to have clear ages, because they exist in an imaginary world. Contradictory things can happen and the rules that govern our world don’t need to apply.

Welcome to Whimsyload.com's selection of character designs. Meet the different character families, read their back stories, and see some of the products that made these characters famous. (Meet some of the not-so-famous characters too!)