Bodhidharma is the semi-mythological Indian teacher who traveled to China in the 5th century, and is credited with bringing Zen to China and starting the Zen linage that we follow today. Zen artists have been drawing his amazing likeness for more than 1000 years. Usually a gruff elderly man with bugging out eyes bushy eyebrows and a full beard, he’s either glaring at us angrily, or he looks forlorn. He usually is wrapped in a red cloak. In contemporary Japan he is known as “Daruma,” who’s image can be seen in almost every shop and tourist attraction.

On April 27, 2014 I gave a Dharma talk at the Village Zendo in NYC. The subject was the Zen teachings and wild unverifiable history of Bodhidharma. I talk about why artists in particular have been attracted to his image. At the end of the talk there is a song that I wrote about Bodhidharma that I taught to the Village Zendo group during our Urban Sesshin music workshop. Some of the attendees were at the talk and we tried to sing the song at the end. Here is the talk in it’s entirety nearly 27 minutes long. If you listen to the whole thing you may encounter vast emptiness, but you will receive no merit.

I made a new painting to illustrate my talk. 22 x 14 inches acrylic on paper. 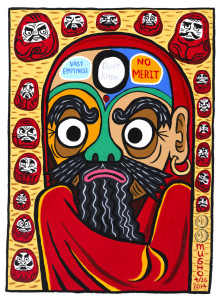 “Everything that appears in the three realms comes from the mind. Hence Buddhas of the past and future teach mind to mind without bothering about definitions… Beyond this mind you’ll never find another Buddha.”