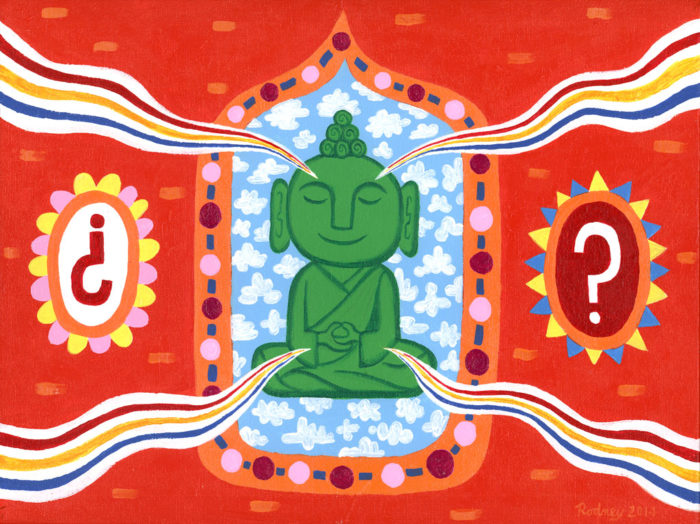 Wavy rainbow light emanates from the practitioner who is engaged in the initial aspects of envisioning All Knowing Buddha. When the practitioner fully realizes the ultimate reality of the mandala, he or she will then merge with the form of the deity. By continuing this ritual offering wrathful spirits will be pacified, negative karma resolved, gross obstacles removed, thus ensuring a good future existence.

Such is the system described by the artwork of “All Knowing Buddha A Secret Guide“ at the Rubin Museum on view from October 3 to April 13, 2014. The show consists of 54 small pigment paintings on paper each one the same size 11 inches square. The colorful, detailed paintings are more-or-less sequential, and seem to describe a complex stepped system of visualization meditation based on Tibetan Buddhist understanding. When were they made? Probably 18th or 19th century. Where were they made? Maybe central Mongolia. Who made them? Don’t know. What were they made for? Don’t know. It’s all very mysterious. The show’s catalog goes through the many theories and the long fascinating provenance of the artworks, and in the show you can read descriptions of each of the paintings with well researched captions describing the mystical action going on in each work. The curators and scholars have done a thorough job creating context and explanation for these works, yet the artwork, it’s maker, and it’s purpose are allusive.

I’m not going to describe the various scholarship around the paintings here on my blog, because – hey! This is my blog, a place where I can write my own weird point of view! Of course I have my own theory about these paintings.

Maybe they were made by an enterprising artist, who had his/her own true religious experience, and believed that by making a book of his/her own visions and submitting it to a publisher the book could be distributed to a larger audience, thus inspiring others to meditation and realization. Since there are no other close examples of this kind of portfolio being produced, my guess it this artist wanted to create a new way to transmit the Dharma outside of the traditional monastic system. He/She worked desperately hard on these works, included every image and theme from the Buddhist art he/she was familiar with, and mixed those with his/her own spiritual experience. Then donated or consigned the project to a patron or publisher with the high hopes of wide distribution, and the higher hopes of saving all sentient beings. Then, as so often happens, the patron or publisher faced unexpected realities, lost or traded the paintings, mislabeled the box, or something like that and the drawings fell into total obscurity.

Now hundreds of years latter the artwork is finally on display and printed in a book for all to see. The long dead unknown artist may have imagined this happening in his/her lifetime and had probably given up hope, and then went back to the monastery to live a quiet and uneventful life. Fortunately now we have the chance to celebrate this visionary accomplishment, enjoy his/her achievement, and marvel at this beautiful detailed illustration of Buddha Mind, free flowing. May wrathful spirits be pacified, negative karma resolved, gross obstacles removed and may we all be ensured a good future existence.

In response to the show I’ve made my own small painting incorporating the wonderful wavy radiating lines found in so many of the illustrations.