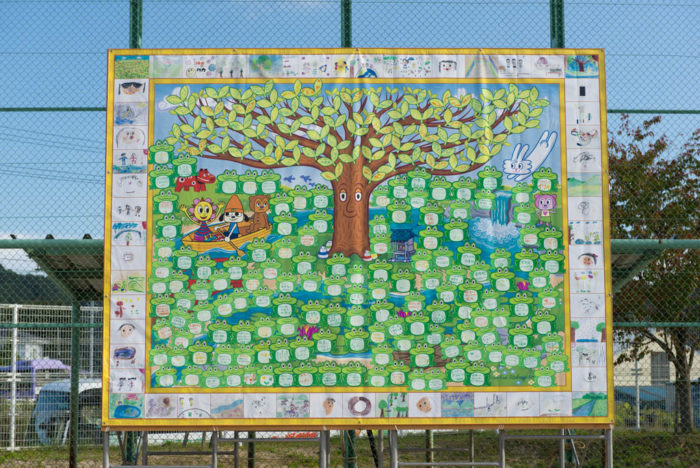 Fukushima Japan has suffered greatly, and is still oppressed by the continuing disaster at the Daiichi nuclear reactor. That is why people in Fukushima have asked me to make some fun artwork to promote community, self reliance and fun. It’s important to get the ex-residents, businesses, customers and even tourists to come back to Fukushima. This year I worked on the “Futaba Festival” which was an outdoor event featuring town pride from all around Fukushima. The event was held on September 28th 2014, at the Kawauchi village’s elemental school, located only 25km (15 miles) from the power plant. The elementary school had 150 students before 3.11 disaster, now only 30 students remain at the school. Over 6500 people attended the festival, and had a wonderful time. The festival included actives, games, lectures, discussions and delicious food.

My assignment was to create a billboard sized poster that the festival attendees could add their comments and wishes too. They asked me to feature a certain kind of frog, only found in a certain lake in Fukushima. Also they wanted to promote the idea of green leaves spouting, symbolizing new growth. My agent also suggested I add some of my famous characters in the background, so that people who did not know my work would easily recognize it. Good thinking!

My design is a pond with a tree in the center on an island. The attendees of the festival wrote their messages and wishes on paper frog or leaf stickers which would then be placed on the poster. The frame around the poster features artworks by the children of Kawauchi Elementary School. Here are some photos of the event, taken by Tak Iwayoshi: