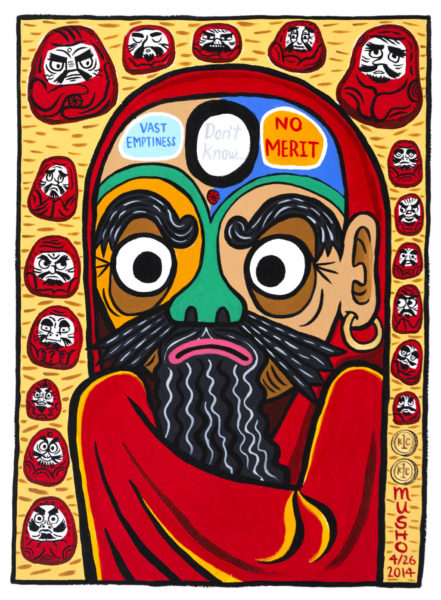 Painting with acrylic colors including metallic gold on watercolor paper. Artwork 14 x 22, paper size 18 x 24 inches. This is an APTOTROPAIC painting, meaning “having the power to prevent evil or bad luck”. This type of art was quite common in ancient times.

Bodhidharma is the semi-mythological Indian teacher who traveled to China in the 5th century, and is credited with bringing Zen to China and starting the Zen linage that we follow today. Zen artists have been drawing his amazing likeness for more than 1000 years. Usually as an gruff elderly man with bugging out eyes bushy eyebrows and a full beard, he’s either glaring at us angrily, or he looks forlorn. He usually is wrapped in a red cloak. In Japan he is known as “Daruma,” who’s image can be seen almost everywhere in contemporary Japan.

“Everything that appears in the three realms comes from the mind. Hence Buddhas of the past and future teach mind to mind without bothering about definitions… Beyond this mind you’ll never find another Buddha.”