View cart “Signed Print – Unidog Transport Service” has been added to your cart.

This is a new ink jet print of a special illustration that was done for promotion of the Parappa TV Anime for Toshimaen amusement park in suburban Tokyo 2001. Printed on high quality 11 x 14 archival paper. Colors are bright and carefully checked. Hand signed by the artist.

“I was asked by Sony Creative Products to design a multi-use image to promote the Parappa TV Anime at Toshimaen amusement park in suburban Tokyo, I think in 2001. The Anime was on Japanese Fuji TV weekly for 26 weeks, but never became as popular as it should have. Toy company TAKARA made many toys for the show, and geared the target audience at a much lower age range that the game had. In this picture you can see PJ’s DJ truck, which was one of the TAKARA toys. TAKARA must have had some special tie-in with Toshimaen park. The scene shows Parappa with his friends from the TV show. Starting from the upper left, Parappa’s sister Pinto, bad guy Gaster (running), Parappa’s school pal Matt (in a car), bad guy sidekick Groober (in a manhole), Sunny, Katy, PJ and another school pal Paula.”

Signed Print – Peace Being Knocks Down The Wall 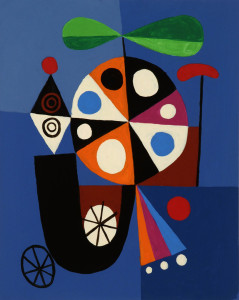