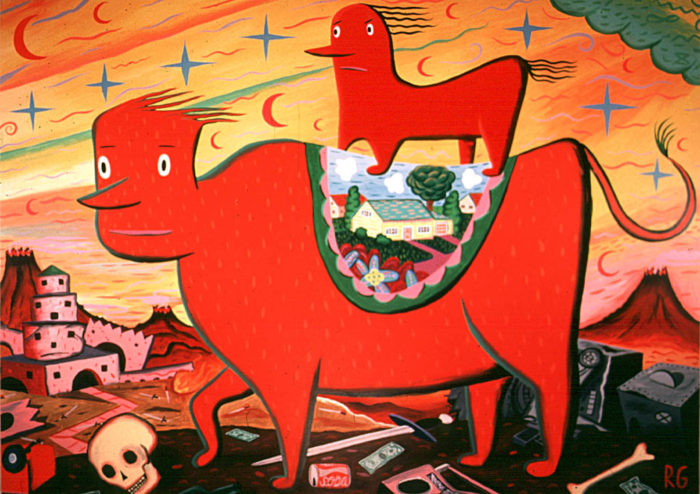 Unusually dark subject matter, possibly inspired by the “neo expressionism” that was fashionable in the East Village art world in the early 80’s. Even so, the painting seems to tell a story of two travelers escaping a wasteland in search of the suburban utopia that can be seen in the painted saddle. I think the narrative that I wanted to express is just the opposite. The travelers had left the suburban utopia, and were now headed into uncharted territory. The death and destruction around them were a new reality they were passing through, on their way to a further unknown. Also as the looming AIDS epidemic was effecting so many in the East Village at the time, fear was everywhere, and a new sense of mortality was shocking everyone. The unknown was much more scary as our friends and fellow artist became deathly ill. The painting also portrays a solidarity between the two characters. Although the smaller creature rides on the back of the larger, they seem more to be working together, and there is a sense of resolve in the expressions of their faces. There is a lot to read into in the details. The ground is scattered with swords, broken robots and toys. Maybe I was trying to say “time to grow up!” And the money scattered on the ground seems to be saying what was valuable in the past is no longer valuable. Aside from the folly of the battle ground, there is also three active volcanos in the distance. Nature’s obstacles are insurmountable. Maybe this is one of my best works form the 1980s, yet it was only shown once at my first show at the Gracie Mansion Gallery on 10th street. The focus of that show was the room installation, and the photos of that were widely distributed. “The Ride” was hanging by the door, and even with it’s large size was easy to miss. The painting was purchased at the show by private collectors, and has not been shown since. Unfortunately there are no high quality photos available either. Luckily there were some 35mm slides that capture the painting as it is seen here.

Utopia far in the past, we now travel through a land of death, destruction, folly and hope. Where are we going? To a better place? Going forward we will see.