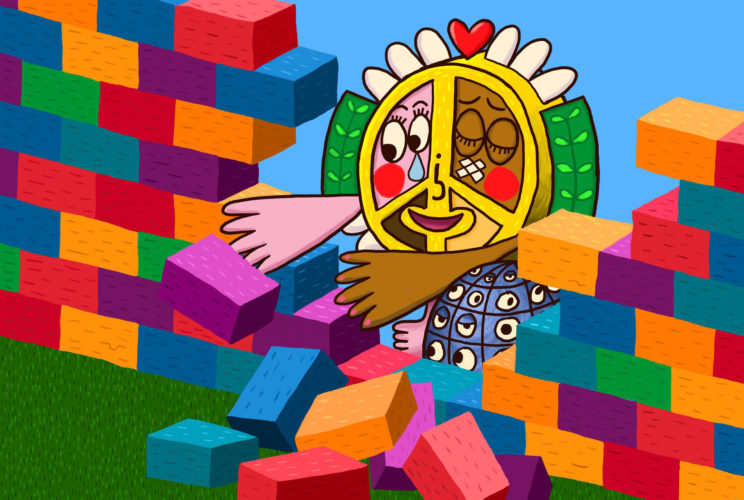 My plan with my new blog is to write regularly about my artwork. There are so many forgotten works of the past that I think maybe deserve some attention, so I will choose some lost work and tell a little about it.

In 2009 I was in the middle of what might be called “a spiritual awakening” where I was trying to express with my artwork what I was discovering in my Zen meditation at the Village Zendo. I don’t really remember what profound thoughts I was having, but luckily I have the artworks I made that reflect (in some weird way) the state of my small nutshell mind. I made two drawings with the computer of a character called Peace Being, who represents all the joy, sadness, clarity and delusion of the world. I had actually designed this character in 2004, before I started my Zen practice, and featured him in a few (forgotten) paintings.

“Peace Being Leaves Home” refers to the Buddhist terminology of the “home leaver,” a seeker who renounces the world of family, career and possessions in order to become a monk. Sounds dramatic, but what I wanted to express was not “renouncing” but more like “reassessing” and doing that by walking a new path, in my case the path of meditation.

Here we see Peace Being walking a new path, away from the land of Squares & Triangles, toward the bright unknown sun. PB seems to be reassuring his friend that the trip is going to be OK. The friend is called iWorld the world globe with many eyes or “I”s, kind of a jokey name, but represents the searching and comparing tendencies of the human mind. The mind that is always looking around, worrying, dealing with difficulties and reluctant to change.

I was thinking this might be the start of a book or a graphic novel of some kind. Somehow though as usual I was sidetracked, and lost focus on these characters.  Another picture of Peace Being and iWorld is called “Peace Being Knocks Down The Wall”

In this picture Peace Being has broken through a colorful wall of hinderances. Maybe it is the wall of any barrier that anyone might confront in life, anything that stops anyone from achieving what they need to achieve, and stops happiness or freedom. What I like about my drawing is the colorful bricks don’t seem to be held together with anything. No mortar or glue, or fittings like Lego blocks have. They are just stacked up blocks, maybe even made out of foam rubber. What seemed impenetrable to iWorld could be easily knocked over by Peace Being who is not afraid.

At this time I was in the process of presenting character ideas to KID ROBOT the character and toy publisher-retailer here in NYC. One of the characters I really wanted to make as a toy was Peace Being. I made some sketches of PB and iW as toys, and enthusiatically showed them at a meeting.

I also made this really funny sketch of a Peace Being Tote bag. I think I found the picture of the model from a clothing website.

I was certain Kid Robot was going to go for it. Unfortunately they said it “was not what they were looking for.” Maybe the quasi religious weirdness turned them off. Kid Robot has many deranged looking and slightly violent looking character toys, so I thought maybe a kind, loving (and a slightly deranged looking) character would be a nice change for them. I still think it is a good idea, and maybe I’ll pursue another publisher with these designs. I think the tote looks fashionable and the large size would be very useful.

Peace Being has four eyes. Two are open, always looking out at the world, and two closed that always search inside his own thoughts and feelings. There is a tear that represents all the sorrow in the world, and a bandage for all the hurt and suffering. On the top there is a heart that symbolizes the power of love. There are olive leaves on each side which offer peace, (except I forgot to draw them on the tote bag..) and the flower petals allude to impermanence. Peace Being has all the different major skin color groups of human beings, which is meant to show racial tolerance and equanimity. How great is that?

If you like Peace Being and want to support him, leave a comment. Also you can buy prints of “Peace Being Leaves Home” and “Peace Being Knocks Down the Wall.” Sorry I don’t have any Peace Being plastic figures or tote bags, but who knows? Maybe someday! Thanks for reading.