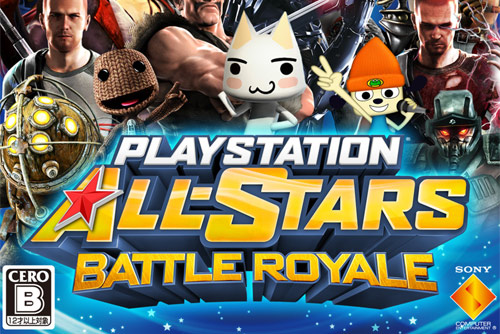 My super famous Playstation game character Parappa The Rapper from the 1990’s made a bit of a comeback in  fall 2012 in a game for PS3 called “Playstation All-Stars Battle Royale” It is a wild fighting game where all kinds of characters from Playstation’s game history come together to fight it out. You can see in this clip from the package art, the kind of characters Parappa has to try to beat up. While many of the charcters have terrifying realistic weapons, Parappa has to try to clobber foes with his cartoon skateboard. The game received pretty good reviews and sold respectably. I never wanted to see Parappa doing violent acts, but my hope was that the US division of Sony that produced this game, would encourage the greater Sony US game production to create a new US Parappa game. Unfortunately this did not occur. Parappa still languishes in limbo at Sony. Even so it is fun to use Parappa as your fighting avatar in “Battle Royale” and whack super militaristic monsters and robots with a skateboard .