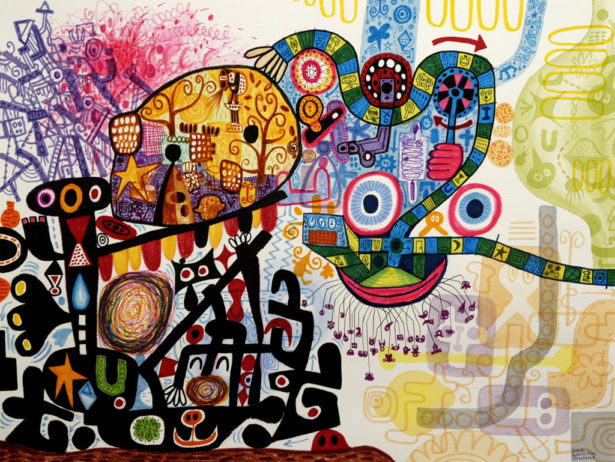 Boom bash the explosion runaway, built on faulty structures. Wheels turn on a path winding around then starting and ending out of sight. Bugs are in the beard of the Great One looming over the riches and wastelands. In a marker drawing from 2003 called “Grand Flux” I stumbled onto a depiction of flawed worlds colliding and fading into vague greenery.

When the United States uses aircraft, ships and vehicles to launch missiles at people I feel a little ill. I don’t want my fellow citizens to become killers or to be killed. I don’t want to have my tax monies used to create death and destruction machines. I don’t want to blow up others homes, towns and cities. I don’t want to kill families. I don’t want enemies. At the same time I can see all the rationale. I can understand the good reasons, the promise of protection and security that make it necessary to justify and conduct mass murdering. Isn’t it important to stop belligerent enemy tyrants? Isn’t it important to protect democracy, and weigh the lives of a few against the lives of the many? If armed brainwashed madmen are charging over the hill, shouldn’t we mow them down with a high powered machine gun in the name of our own survival? Shouldn’t our freedom and way of life be protected no matter the cost?