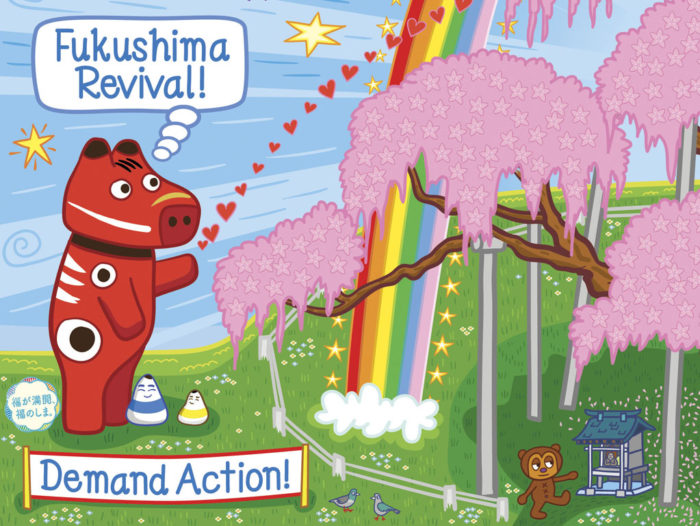 Sometimes when you are trying your best to do good, some better informed person comes along and tells you your actions may be having the opposite effect. Eeek! It’s discouraging and may make you feel that doing good is nearly impossible. Not true! Please do good! On October 5th I created a post called “Fukushima Festival Fun” a hopeful poster design for a community festival to help with the redevelopment of the area around the devastation created by the disaster at the Daiich nuclear power plant. I’ve visited the Fukushima prefecture twice since the disaster.

I proudly posted pictures of the artwork I had done for the people of Fukushima on my website and FB page. The next day I got a comment from a well known journalist familiar with the issues saying that places as close to the plant where the festival was held are still unsafe, and the Japanese government and the power company are pushing to make it seem like the problems are going away, and people can return, but it is still actually dangerous, especially for children. I was shocked and I felt terrible. Could I be exposing children to radiation? Was my heartfelt response wrong? Did I make a mistake?

In a 20km radius around the massive meltdown at the Daiichi nuclear power plant there has been a complete evacuation zone. 20km is about 12 miles. For comparison the length of Manhattan from end to end is about 13 miles. So think of a circle the size of Manhattan, in a well developed, populated suburban area that includes farming and fishing industries, where no one knows if they can ever can return to their still standing homes and businesses again.

The next day I wrote to my friend and business partner in Tokyo and asked him about the safety of towns that are reopening around the plant. He sent me an email with very few words, but it had an attached map, showing the current radiation levels around the evacuation zone. Here is the map: 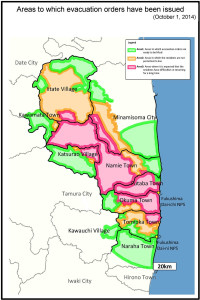 It looks like an uneven jigsaw puzzle. Some areas showing safe levels and others unsafe, due to the hills and valleys, ground water, drainage and many other factors. It’s too complicated to generalize about without current radiation levels from every town and village. You can see Kawauchi Village, where the festival was on the map in the lower center. Although some towns are inside the exclusion zone, radiation levels are being called safe. That is the information that the residents have, and I believe most of them do not trust the Japanese government and the power company at this point. They must be relying on information from their own town leadership, and independent science.

After looking at the map, I took a deep breath. I had to see that I don’t have any answers or solutions. I only have my own sincere desire to do what I can, relying on the information I have, and using my unique talents and energy to do good.

Even though the situation in Fukushima is complex, I have learned one simple thing. Nuclear power plants are not worth their intrinsic risks. Many experts and more informed people will argue with me about benefits of nuclear power, but after being in Fukushima myself, I know I never want anyone to live near a meltdown.

Here in New York City, we have an operating nuclear power plant called “Indian Point,” located in Buchanan, New York just south of Peekskill. It sits on the east bank of the Hudson River, 38 miles north of New York City. If there had to be a 20km exclusion zone around Indian Point, it would include most of upper Westchester County, parts of Rockland, and a huge part of the Hudson River. Here is a map that shows the Fukushima Daiichi plant disaster superimposed over the Indian Point plant. It’s pretty scary. For more information take a look at the riverkeeper.org website, and why not look at Indian Point’s website too, and start to make your own decisions about this challenging problem. 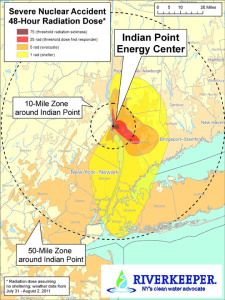